The office holiday extravaganza 2017 is over! We celebrated ourselves, ate, built our team, played games, and mingled {whisper: woo hoo it’s over…did I say that…Shh…Don’t tell my bosses).

The bosses seem to really enjoy extending the hand of cheer. I appreciate the thought. It must be hard from the managers’ point of view. Year over year of doing more with less has taken its toll on morale. As we’ve lost staff to better opportunities we’ve lost a lot of those positions. We’ve gotten testier with each other to downright depressed. While the effects of a potentially booming economy have not yet materialized, the hope for the future is strong.

We manage our emotions, stress, and disappointments. Then here comes “the season of light and joy.” That somehow gets transformed into “the season of great expectations.” We try to enjoy our personal holidays. We want it so badly we think we can reach out and capture the magic, if just for a few weeks. It’s all around me: family, colleagues, shoppers, friends, and workers trying so hard that they are just tired. The smile doesn’t quite reach their eyes.

I believe my managers see it too. They want happiness for those of us who work for them. So, the traditional remedies for boosting morale are pulled out of the proverbial manager’s box of tools. Holiday events abound. So far we’ve had the party for the floor, annual fundraiser, employee recognitions, and our own off-site meeting (code words: Holiday Party).

Some of this was fun and enjoyable. So why is there still a plastic smile plastered on my face? It’s the undercurrents that pull and tug at my soul. I’m pulled in so many directions during the season, workload, stress, rivalries, and expectations. The shopping, traffic, short tempers…Oh My!

So how did the Office Party go? Actually pretty well considering how much I dread parties in general. There were the usual cliques that only socialize with each other. I did the clique thing last year where I stayed with my expected group of friends. Everyone rolled their eyes at the appropriate times and laughed at the inside jokes. Been there done that.  If it sounds like high school, you’re right the Office Party usually is.

We were outdoors this year with grill masters finessing our meat and vegetarian selections. By the way the venison was excellent. We ate then listened as our fearless leader described our 2017 achievements {yawn}. We played a team building game while breathing in the smoke from the dying charcoal in the grills. It was interesting to hear the places people traveled to that they found the most fascinating. I am not well-traveled so it was embarrassing to simply answer “My heart belongs to the Blue Ridge Mountains.”

I didn’t know what to say. What I actually enjoyed the most was the squirrels’ antics. Now I don’t like squirrels that much. I think of them as rats with PR. But as the speech droned on I found myself snapping photos of the squirrels. They ran amongst the volleyball, bocce ball and corn hole games setup for players. They seemed to beckon us crazy humans to play in the sun. The squirrels would inched closer and closer to snag bits of food the humans had dropped. Did I listen to the speaker? Yes, I even managed to pay attention when he mentioned the accomplishments of my unit. But the squirrels made me smile. 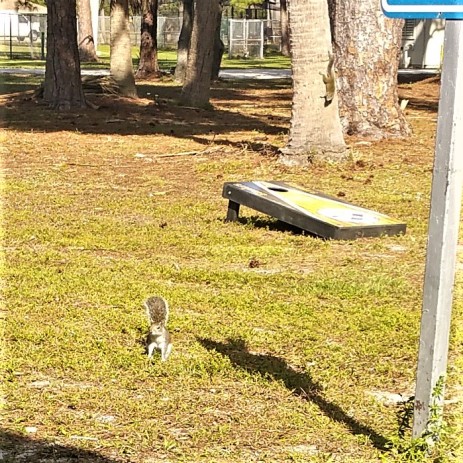 Ready for some Corn Hole! 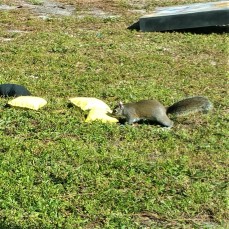 If I can just pick it up… 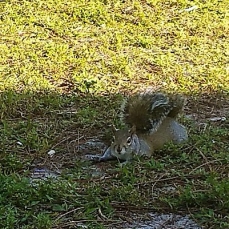 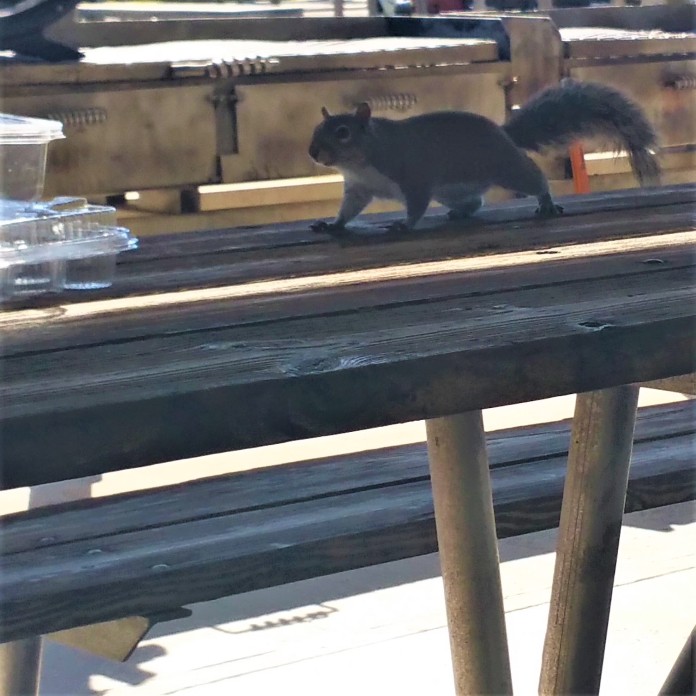 What’s in the da Box…

I’m not sure if the humans ever joined them in the sun. I had work to wrap up and went back to the office after the group photo. Did I pay for the meeting? Oh yes, with headaches and coughing up smoke for a couple of days. Was it worth it? Yes, I think so. I talked to other co-workers I don’t get to socialize with much. That was the part with the humans that I enjoyed. I learned to stretch a little beyond my comfort zone and relax just a little. I was true to myself. That’s what matters most in the season of great expectations.

Stay true to you my friends. Love,